Since its establishment, NALED has dealt with various issues in the field of public finance, primarily the subject of tax and non-tax duties. In the past 15 years, numerous initiatives have been launched and many reforms have been successfully implemented, with the aim of reducing the financial and administrative burden on the economy and improvement of business conditions.

Most of the reforms that have been, or are currently being implemented around taxes, are related to labor taxes, i.e. personal income taxes and contributions for mandatory social insurance, property taxes, taxes on use, holding and carrying of goods, consumption tax, VAT, and excise tax. In addition to tax reforms, NALED has been focusing on non-tax levies and parafiscal duties for more than a decade, which the state at all levels of government levies on the economy and citizens.

For more than a decade, NALED has been working on the reform of parafiscal duties, with the aim of reducing the administrative and financial burden on the economy and citizens. With the support of the United States Agency for International Development (USAID), as well as its members, primarily business associations and companies that are faced with numerous problems in this area, NALED has advocated for the abolition of parafiscals and the establishment of a single, electronic register of non-tax duties.

The elimination of 138 parafiscal duties (doubled or extraordinarily high levies) by the end of 2012 was one of the first NALED projects in this area to be successfully completed with USAID's support. In addition, NALED has actively participated in advocating for the reform of various fees for the use of public goods and their unification into one systemic law at the end of 2018.

From the end of 2019 to the beginning of 2022, in cooperation with Partner Solutions, KPMG and the Mihajlo Pupin Institute, and with the financial support of USAID, NALED carried out activities for the reform of non-tax revenues. The key result in 2021 was the register of non-tax duties, which includes more than 2,000 national, local and provincial duties (it contains the name of duty, type, payer, amount, exemptions and reliefs, account number, etc.). In addition, proposals were made for the institutionalization of the register as well as for the improvement of the existing system of local administrative fees.

Since one of the main strategic goals is to improve the business regulatory environment by reducing the shadow economy and the tax burden, NALED assisted the Government of the Republic of Serbia and the Ministry of Finance in the reform of the tax laws with the support of its members and the German Development Cooperation (GIZ projects).

One of the most significant forms of taxation is the value added tax (VAT), and since 2017, NALED has participated in the analysis and making recommendations for the amendment or repeal of the Rulebook, which introduced the obligation of business entities to submit an overview of the VAT calculation along with the tax return, which, according to the economy, represented one of the most significant administrative and financial problems.

Since the beginning, NALED has been involved in the organization of the prize game "Get the bill and win", which unequivocally indicates that citizens' awareness of the importance of the fight against shadow economy is increasing, primarily in the area of trade, i.e. issuing fiscal bills. NALED's Gray Book contains a significant number of recommendations on VAT primarily for the Ministry of Finance. Additionally, NALED proposed an initiative to the Ministry of Finance and the Government of the Republic of Serbia, for the amendment of the VAT Law and certain by-laws, with the aim of further improvement and creation of an encouraging and competitive environment through reduction of administrative problems and costs.

NALED dealt with taxation of consumption, through VAT and excise duties, within the EU integration process, with the aim of fulfilling the basic criteria for the opening of negotiation chapter 16 - taxation, which has been coordinated through the NCEU since the end of 2019. In this sense, recommendations were made to standardize the excise treatment of strong alcoholic beverages, through the prescription of excise duty according to the percentage of alcohol contained in the drink, and not according to the type of drink, which was the case for more than 20 years. NALED welcomed the amendment of the Excise Law at the end of April 2021 and supported the adoption of the Negotiating Position for this extremely important economic chapter in the National Assembly. In addition, NALED prepared a document on VAT and the need for further alignment of regulations with EU legislation, as well as a recommendation to reduce the administrative burden on the economy, primarily through the abolition of the Rulebook that prescribes the obligation to fill in and submit a review of VAT calculations.

Taxation of transfers of absolute rights on used motor vehicles

In 2021, NALED, in cooperation with the PPS (Public Policy Secretariat of the Republic of Serbia), prepared the Analysis of the Improvement of the System of Transport and Registration of Motor Vehicles, with the aim of improving the procedure of transferring ownership of a used motor vehicle between natural persons and automating the calculation of tax on the transfer of absolute rights.

In line with the results of the analysis, an initiative was sent to the Ministry of Internal Affairs and the Ministry of Finance, with a proposal for a new way of calculating the tax on the transfer of absolute rights in this procedure with a formula for calculating the amount of tax as well as an assessment of the effects of these changes on public revenues. The Law on Amendments to the Law on Property Tax was adopted at the end of 2021, in combination with other tax laws. Further steps refer to the establishment of an administrative service for the calculation of tax on the transfer of absolute rights in the procedure of transferring ownership of a used motor vehicle, which will be provided through the eGovernment Portal, by the Office for IT and eGovernment. From March 31, when the application of these provisions of the law is foreseen, the process and procedure of transferring the ownership of a used motor vehicle between natural persons will be significantly shortened, and on the other hand, the administration of the Tax Administration will also be reduced.

Bearing in mind that the Law on Public Procurement came into force on July 1, 2020. With obvious room for improvement, NALED has started implementing the project "Effective public procurement in the service of economic growth" with the aim of improving the public procurement system and encouraging the use of criteria other than price. The project isfinanced by the Swedish International Development Cooperation Agency (SIDA) with the plan of strengthening the capacities of contracting authorities and bidders, improving transparency and efficiency through digital solutions, improving supervision and execution in public procurement, as well as strengthening the role of civil society and the public. The implementation of the project started in January 2021 and will last until December 2022.

Due to the Law on Electronic Invoicing coming into effect in May 2021, NALED began a project with the British Embassy and the company Philip Morris as part of the StarTech project to assist the Ministry of Finance in implementing a new electronic invoicing system. The goal of this project is to familiarize subjects with their obligations and prepare them for a new business model. Over 20 training sessions were held with 700 participants from the public and private sector, 2 workshops for accountants' associations and independent accountants, as well as two workshops for ERP providers and IT companies. 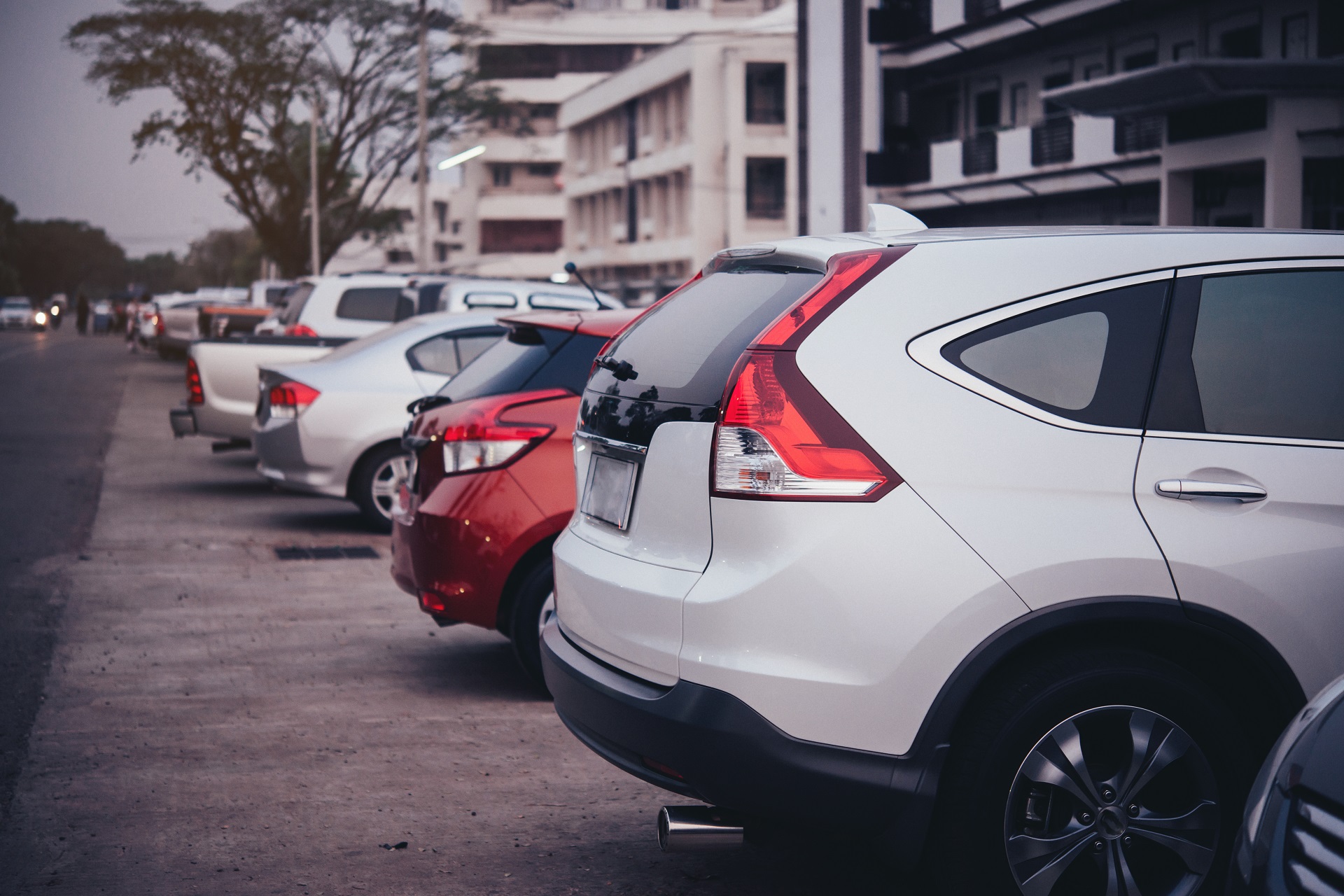 Citizens have to visit four counters to buy a used car

NALED’s latest survey has shown that the procedure of transferring...Read more 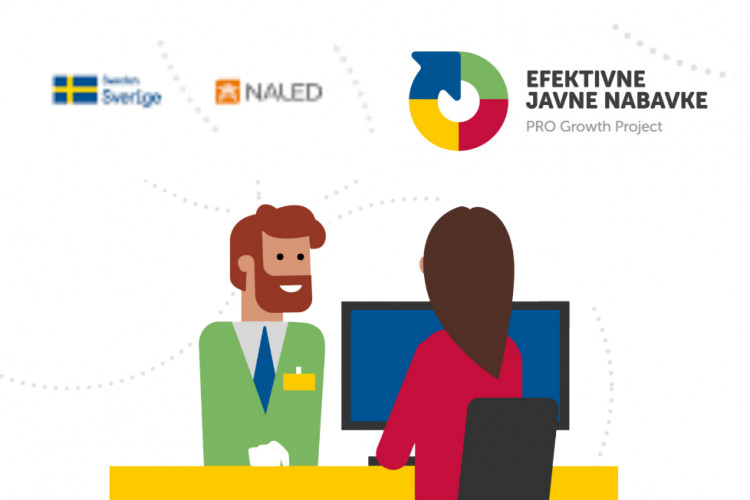 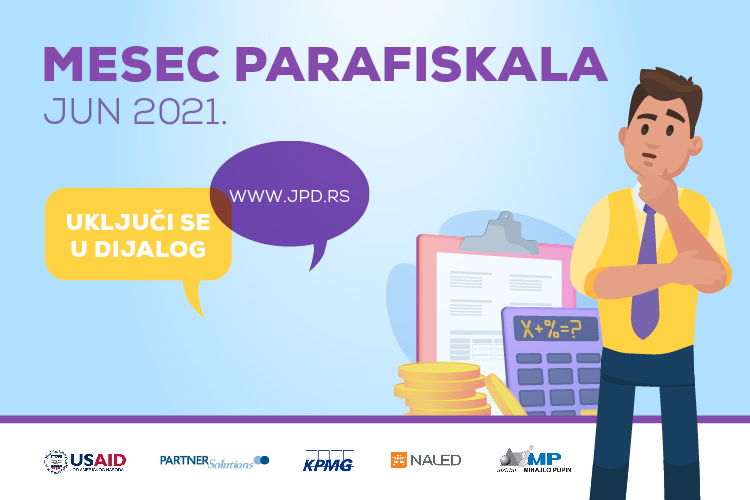 The "Month of Paraficals" campaign started today with an invitation to citizens and businesses to nominate taxes, fees and other non-tax...Read more 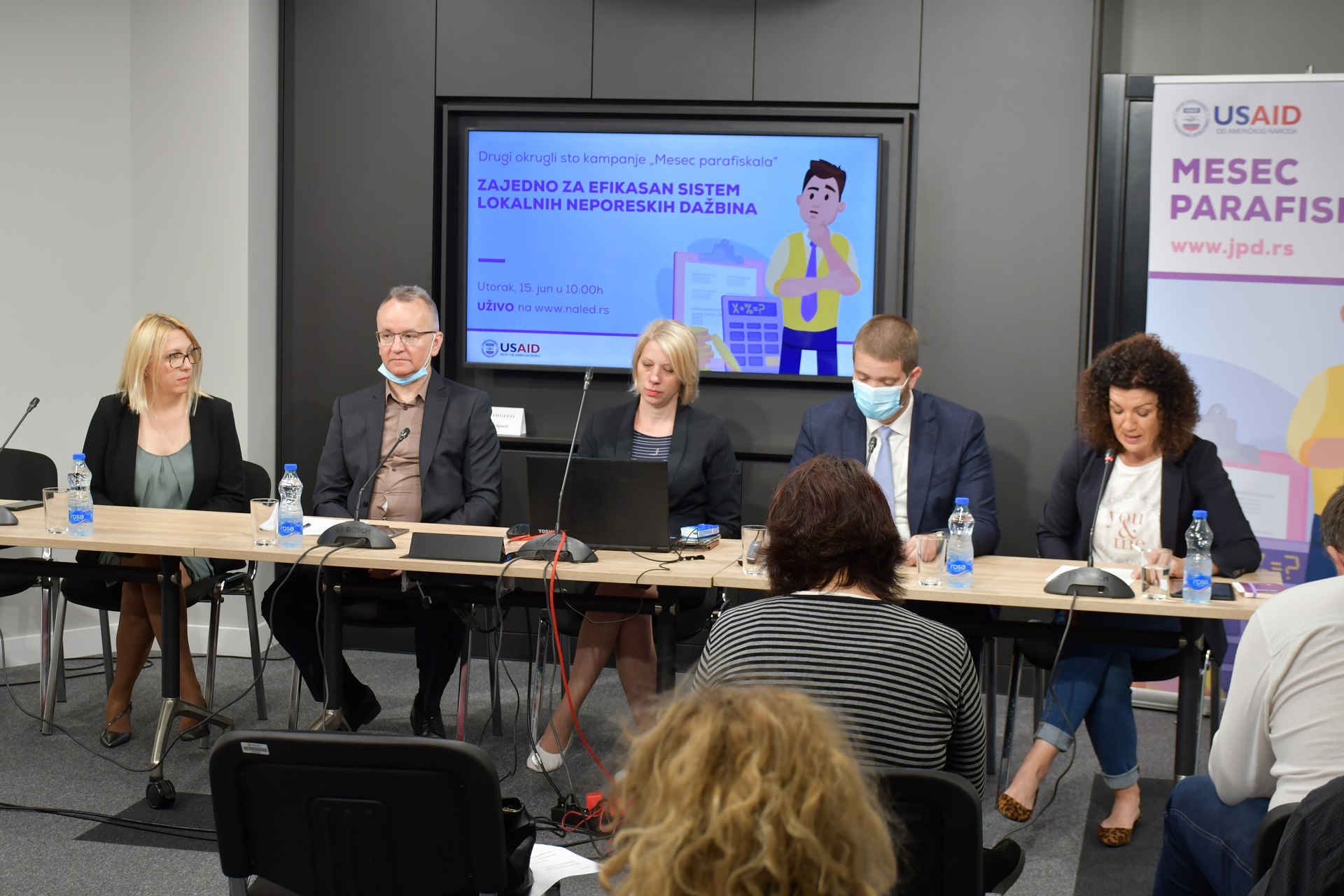 Local non-tax duties are listed in more than 400 decisions, and the amount of a...Read more 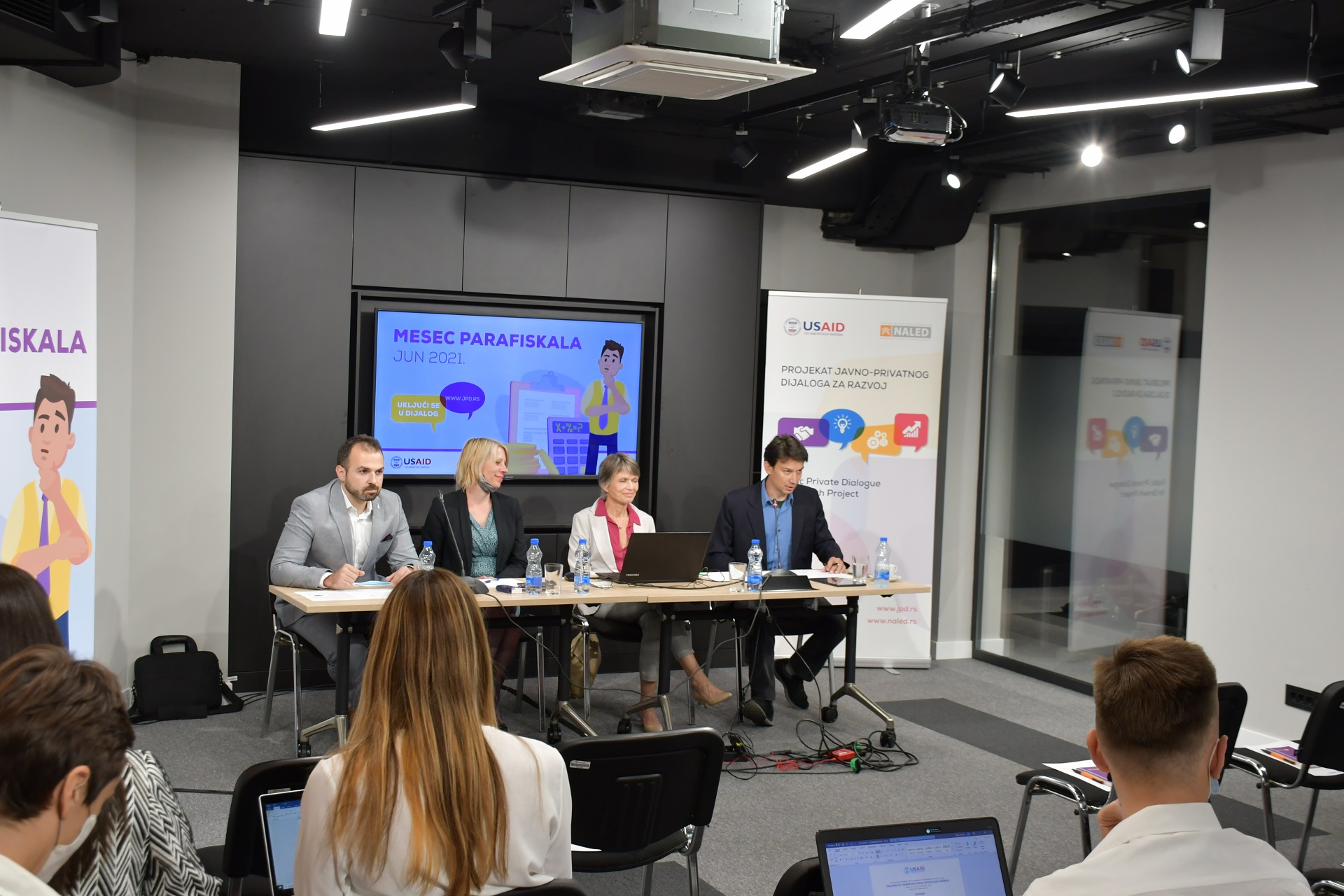 For citizens and businesses to have an insight into the fees and charges they...Read more 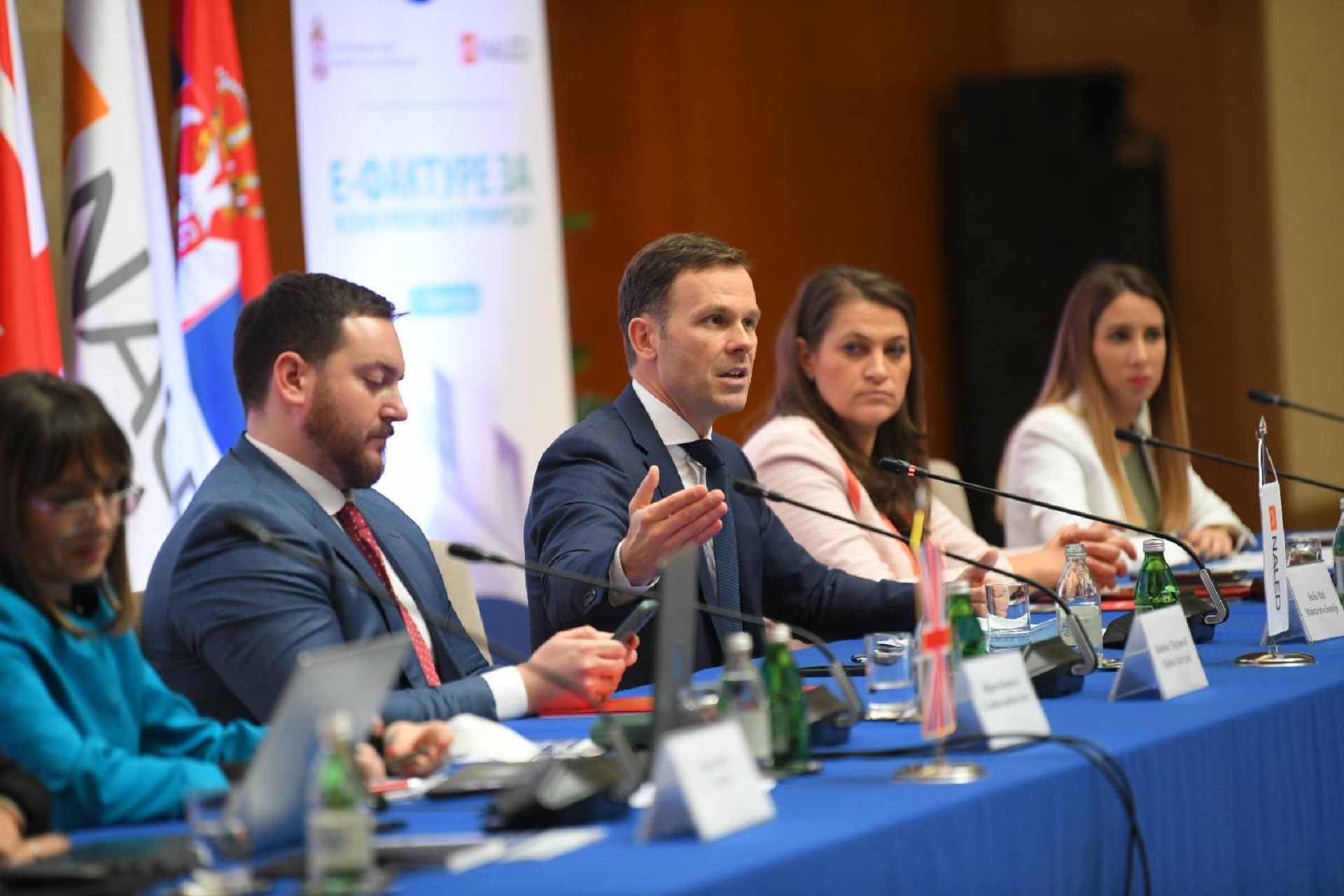 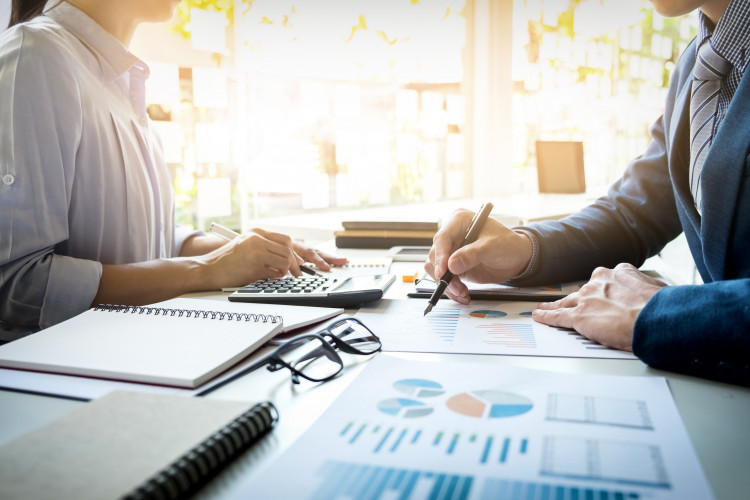 Improving the transparency and predictability of non-tax charges...Read more 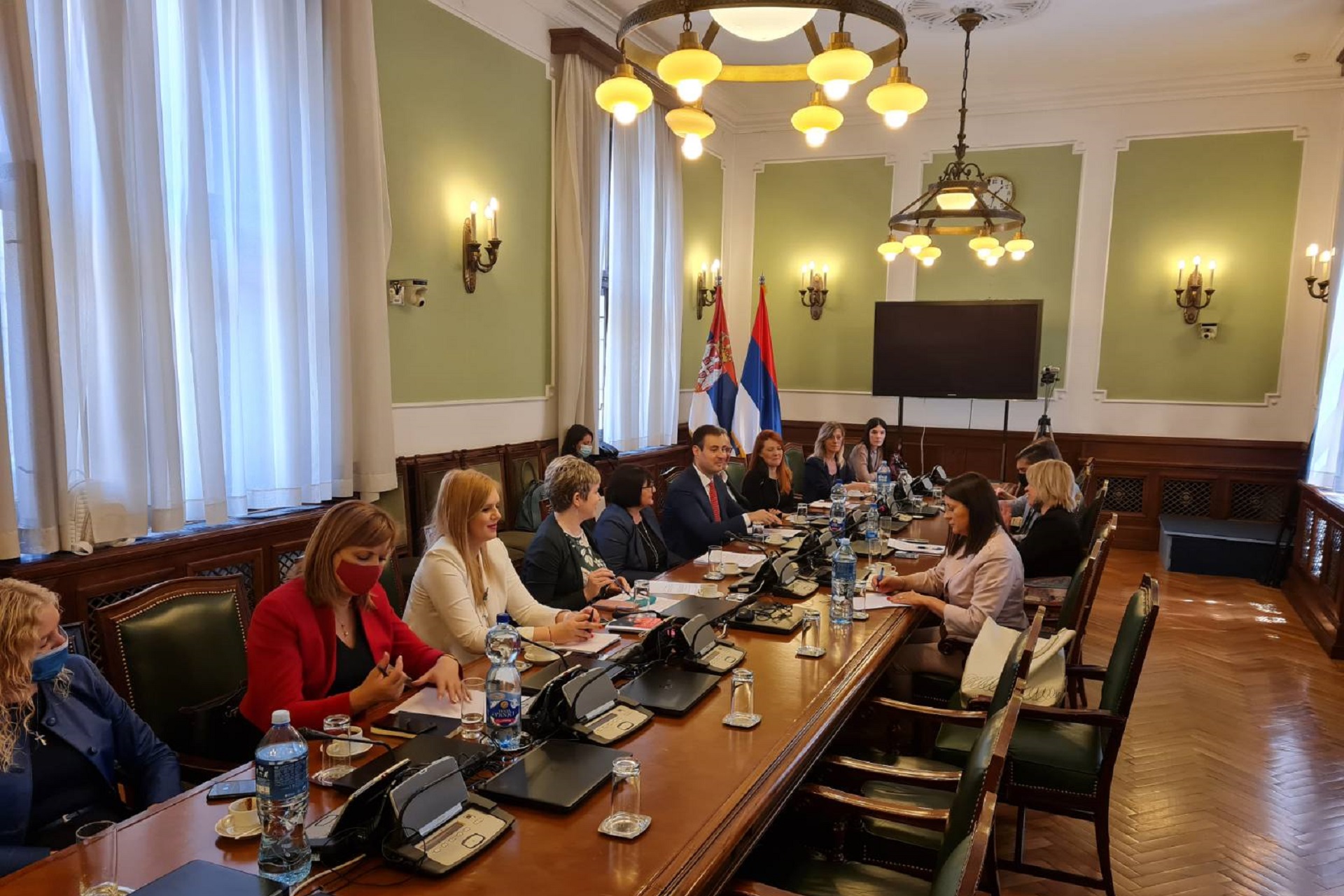 On Thursday, May 27, in the National Assembly, at the initiative of the Committee on European Integration, the representatives of the...Read more 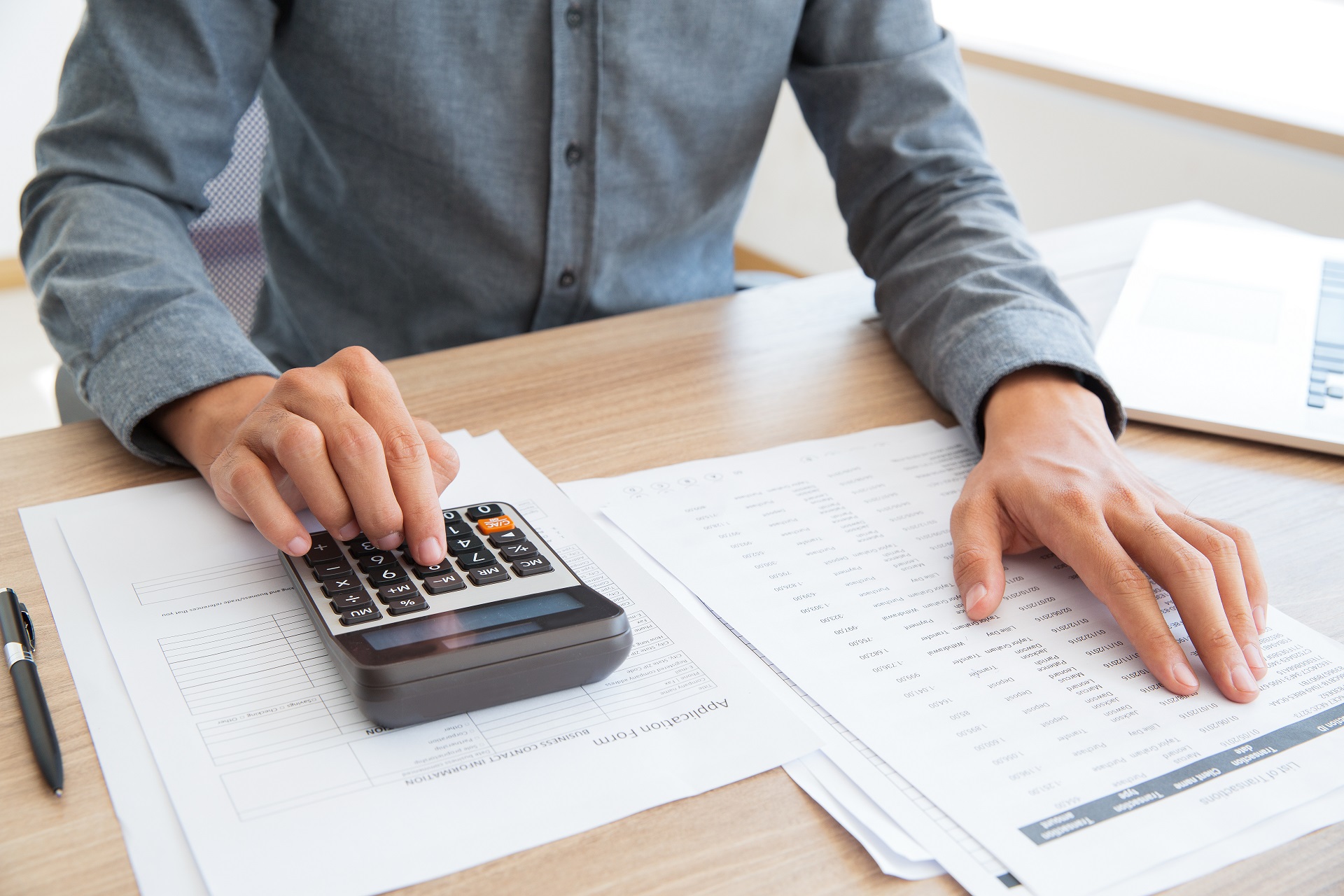 Non-tax charges, their number and lack of systemic organization, still cause a major problem - it is shown by the recently published...Read more 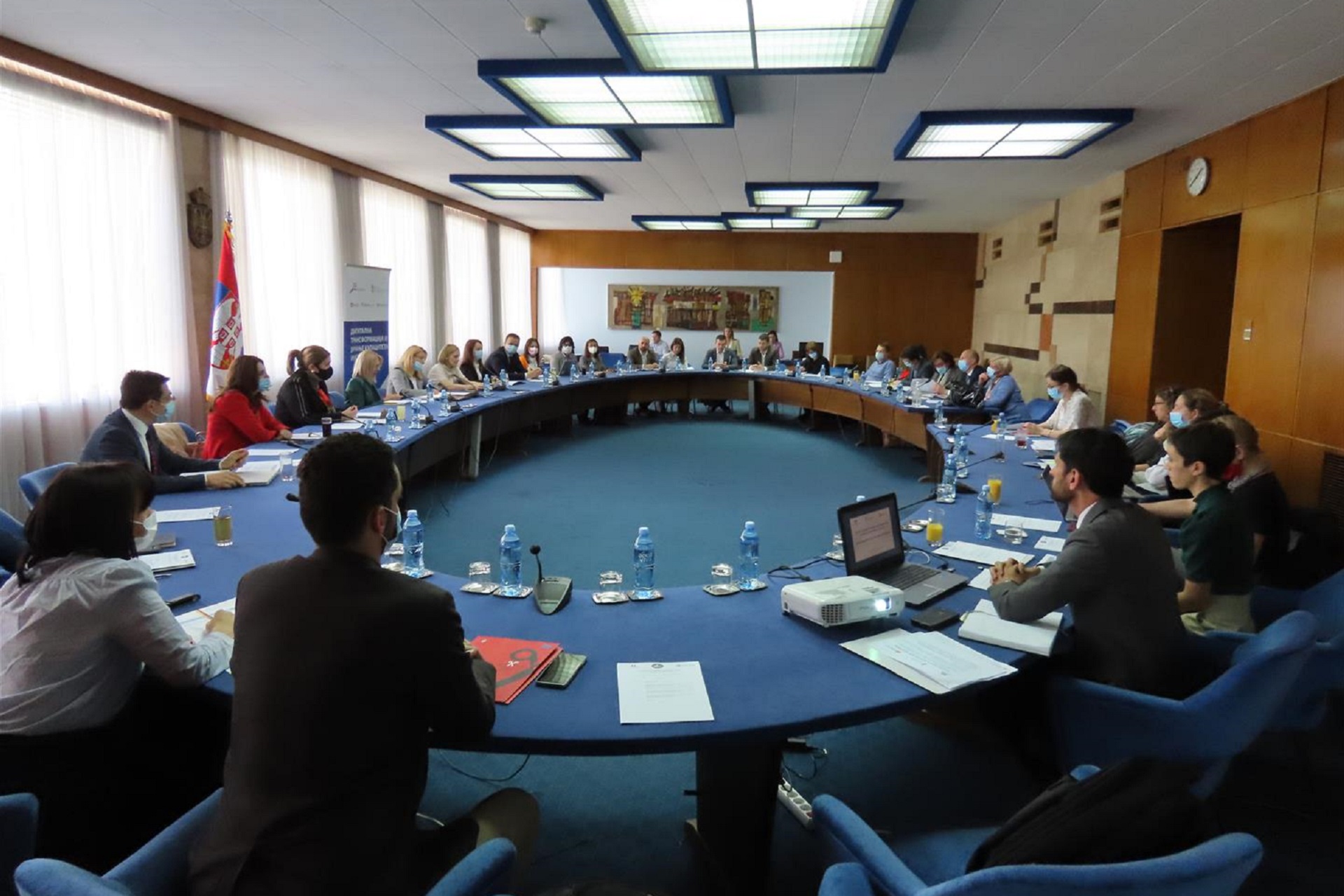 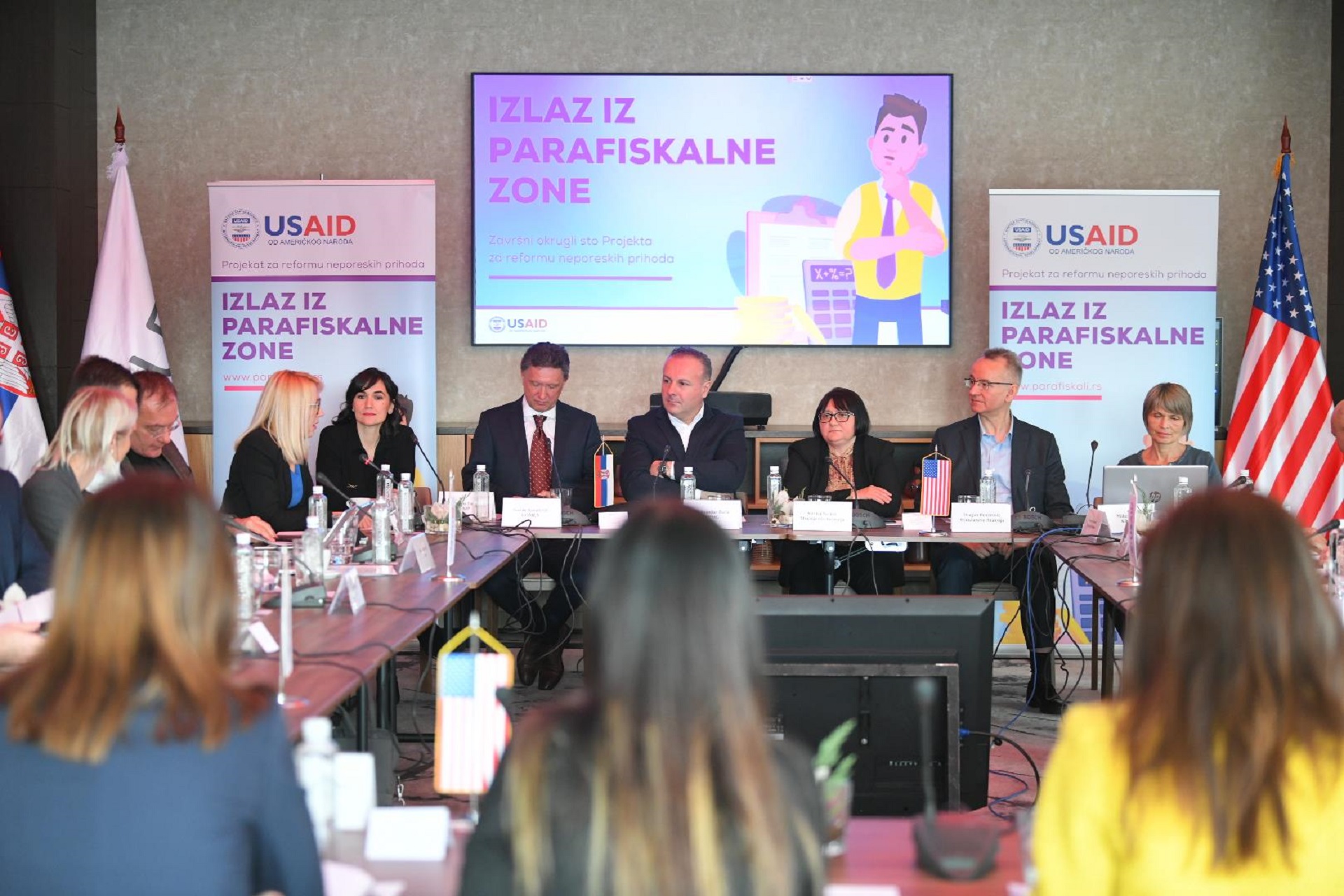 More than 2,000 fees and charges in the online registry of non-tax duties

The online registry of non-tax duties has included more than 2,000 non-tax fees...Read more