Imagine an administrative procedure that requires four times less time and 83% less money. This is a very realistic possibility of ensuring significant savings for citizens, and higher efficiency of line institutions, if the registration procedure in the Registry of agricultural households and the process of submitting applications for subisidies would be transferred from paper form into the digital environment.

The analysis performed by NALED with the support of German Development Cooperation has shown that farmers are obliged to submit 89 pieces of data on more than 10 various documents, of which at least 60% is unnecessary (they are either repeated several times, or they already exist in databases of other institutions). The officers manually check the data, or even retype them, which results in unjustified waste of time and may lead to delays in the payment of subsidies.

A recommendation from NALED's Grey Book, popularly called e-agriculture, basically proposes a software solution enabling household proprietors to use accounts on the Agrarian Payments Directorate web portal (similar to a social media profile) and directly enter the data about themselves, the household members, the land used for production, the animals and cultures grown at the household. The software would control the validity of data upon insight into the databases managed by the Real Estate Cadaster, Ministry of Interior, Business Registers Agency, Veterinary Directorate etc.

The household proprietor would also use the web portal to submit applications for subsidies, and the decisions would be issued and received electronically. This may sound futuristic, but it is actually quite easy to implement, and we were met with open doors at the Ministry of Agriculture, showing willingness to improve the procedure. The Ministry has already made a huge step by eliminating the mandatory annual renewal of registration (except in case of changes in essential data) that imposed the highest costs (nearly 750 million dinars), but the overall cost of registering households for farmers could be further reduced from 133 to 19 million dinars, as well as the average time of implementing the procedure (from 280 to 75 minutes).

Why is this important? The existing registry already involves more than 430,000 registered hosueholds, of which at least 376,000 are active. The simplification of procedures would relieve a huge number of citizens influenced by this process. 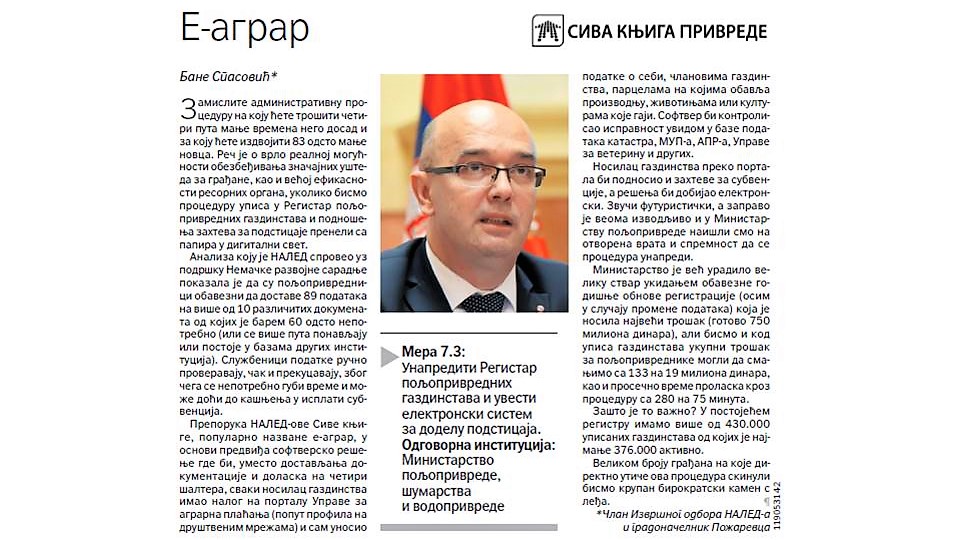