Some of the most prominent examples include the uncertainty in terms of amount of taxes for the upcoming year, bearing in mind that the tax base may be increased based of a series of criteria subject to arbitrary assessment of inspectors, as well as the delay in delivering tax decisions – the Tax Administration annually prepares even 350,000 decisions (for pre-payment and final amounts) which inevitably leads to months of delays in their creation and delivery.

NALED has been indicating the disadvantages of lump-sum taxation system since 2015 through its Grey Book, while last year, together with Association for Development of Entrepreneurship from Niš and with the support of USAID, a campaign "Lump-sum taxation month" was initiated within the project „Public Private Dialogue for Growth“ with the aim to gather around this group, propose the best solutions and stimulate line institutions to action.

We found an open door in the Ministry of Finance and a working group has been formed involving NALED and lump-sum tax entrepreneurs, and we are near a solution that would acknowledge our recommendations, ease the lives of lump-sum entrepreneurs, support the development of entrepreneurship as the greatest generator of employment, while not lowering the tax revenues and contributing to legal employment – the reform of lump-sum taxation is one of the key measures of the National Program for Countering Shadow Economy.

The cornerstone of the new system will be the new software and precisely defined criteria for determining the amount of tax. Those who are just starting their business will be able to check whether they can operate in the lump-sum taxation system, and calculate the amount of tax for several years ahead, in under a minute by using a web application. The existing entrepreneurs will know the amount of taxes for the upcoming year already in December, they will receive the tax decision (one instead of two) electronically and make payments to a single account, instead of four. The Tax Administration will no longer have the burden of issuing more than two million pages of documentation, and tax inspectors will be able to focus from administrative tasks to the aspect of control, where they are the most needed. 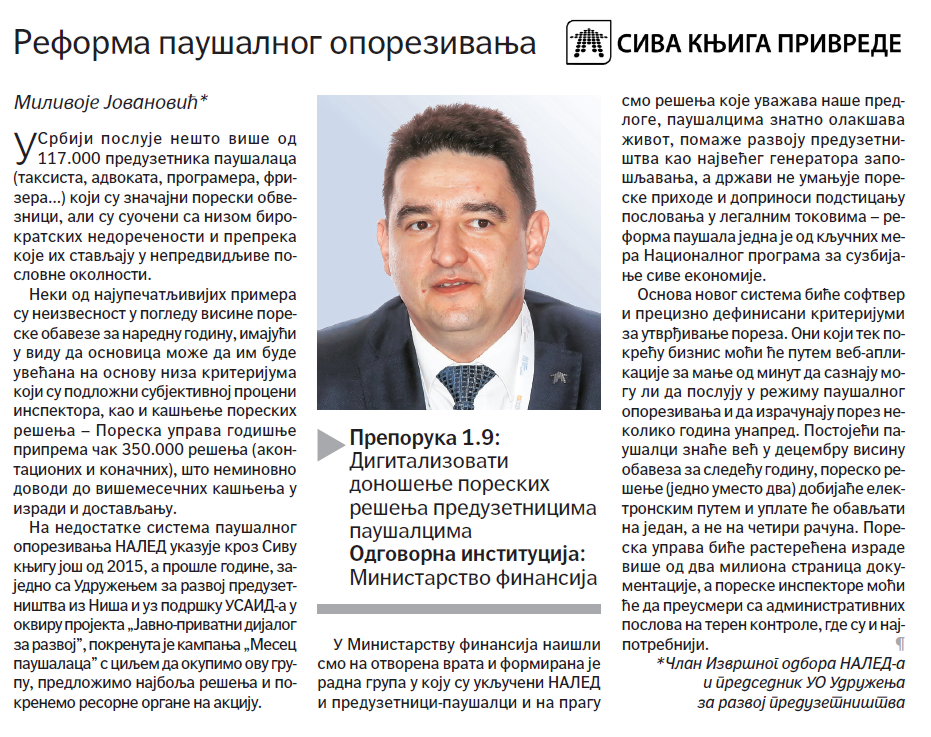