The total debt to suppliers currently exceeds 100 million euros, and the reasons are various - from the lack of funds in the Republic Health Insurance Fund, the deficit in the budget of health institutions, to misuse and inadequate controls and penalties.

The major part of the debt has been incurred due to medicines delivered through centralized public procurement system, and the good news is that the state is now finally determined to stand in the way of further expansion of debt, and try to establish a stable system. The practice of direct payment to suppliers by the RHIF should be initiated from June 2019, for the deliveries to hospitals and primary health care centers, which will reduce the risk of inadequate spending of funds. After establishing control of payments, the issue of previously generated debts is expected to be resolved as well.

On the other hand, the pharmacy groups will retain the old financing system, though they have been experiencing decline for quite a long time, due to inadequately defined margins. The state's plan to privatize the pharmacies is inadequate, and privatization is initiated only when they are already blocked and non-functional. The right path would be to issue a decision that these pharmacies are necessary for our society, and arrange a series of measures that would enable their sustainable work, or to start the privatization at a point while they still have some value. We need brave decisions that would enable long-term smooth supply of medications, without negative consequences for the suppliers and the state budget. The new Law on Healthcare transferred the debts of pharmacy groups to the jurisdiction of local governments, without analyzing the debts and the municipal budgets. In some cases, the illiquidity of pharmacies would simply turn into illiquidity of local governments.

In Grey Book 11, the recommendation for improving the system of medications procurement and payment is once again among the top 10 priorities. We wish to work together with the Government of Serbia to overcome this problem, by establishing a joint working group, as this recipe has proven to be very successful in the field of countering shadow economy and improving Serbia's position in the Doing Business list. 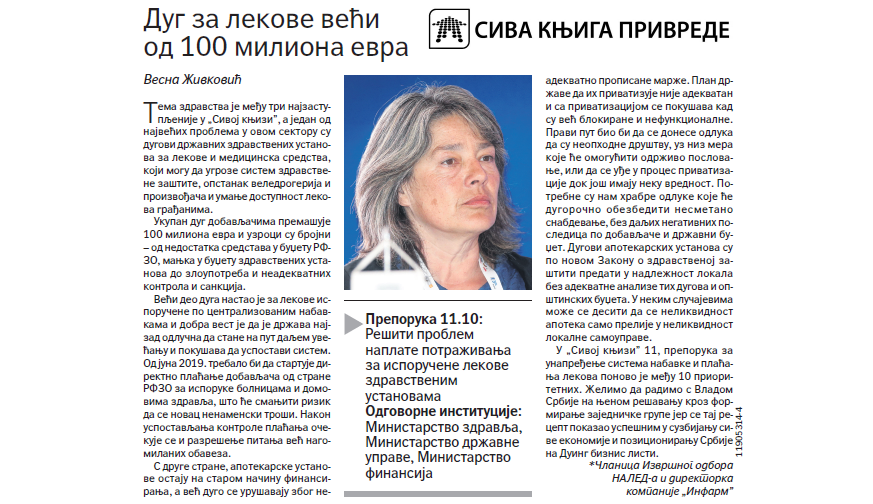