Information on regulation and regulatory changes are crucial and important for economic entities, considering that they shape the rules of business on the market. Creating a business environment that stimulates economic development, implies fulfilling several important preconditions, which are: predictability and stable economic policy without frequent and sudden changes and greater legal certainty which is reflected in consistent application of laws, efficient administration and transparent communication with state authorities. It is for this reason that NALED formulated the Regulatory Index of Serbia - RIS with the aim of providing insight to both members and the general public on the manner and quality of enactment and implementation of regulations in Serbia.

RIS consists of six components, of which each follows a specific phase of law-making: 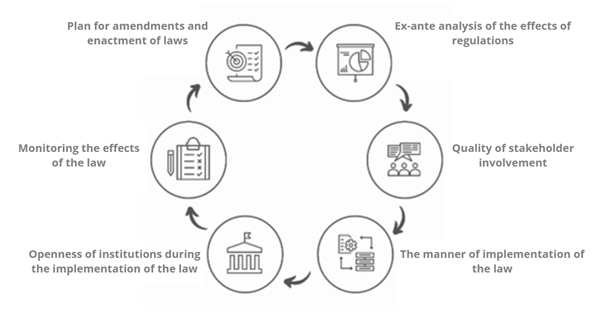 The Regulatory Index of Serbia is based on official data sources, including statistical data, insight into official reports and presentations of institutions and data obtained or submitted by institutions. It consists of 15 different indicators, each monitoring a particular aspect of the preparation, availability or implementation of regulations governing the economic environment. These indicators are publicly available, verifiable and individually relatively easy to measure.

In addition to the RIS index, the report also contains an analysis of the perception of businesses, civil sector and public administration on the level of development of public- private dialogue in Serbia and the manner of preparation and adoption of regulations. The analysis of perception served us to compare the actual data with the perception of stakeholders, which confirms the adequacy of the methodological approach.